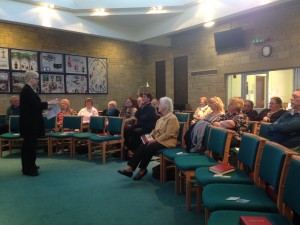 The Wales Synod was delighted to welcome Gill Dascombe, the Vice President of the Methodist Conference to the Newport & Lower Wye circuit over this last weekend 21st/22nd February. There is a sense in which we were welcoming Gill and her husband Mike back ‘home’ as she was visiting the churches, and indeed staying overnight in the manse, where her father Rev. Vic Staton had been the minister in his last appointment in 1976/77.

On the Saturday afternoon, Gill led a workshop for Local Preachers and Worship leaders on what it means to preach the Gospel to a 21st century congregation, before meeting with members of the ecumenical ‘Lab’ team over an evening meal in the manse. Then on Sunday morning, Gill preached at a communion service at Bishpool where the Synod Chair, Rev. Dr.Stephen Wigley presided, before going to visit Tintern (sadly in the pouring rain!) in the afternoon. Gill’s visit came to a close as she preached at a circuit service at Trinity led by Rev. Anne Ellis, in which many Local Preachers and members of the ‘Lab’ team took part. 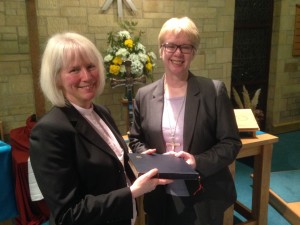 The service concluded with a moving moment when Anne presented Gill with a Preacher’s edition of the old Methodist Service Book which had been dedicated to her father’s memory, and which had been found in the Chepstow Road manse.

We were delighted that Gill and Mike were able to find time in the midst of her busy year of office to renew acquaintance with old friends in Wales; and we wish her well as she continues to represent the Conference and the ministry of lay people in the Methodist Church during her travels for the rest of this connexional year.