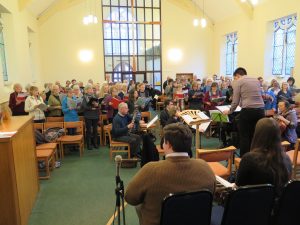 Another successful Come and Sing took place at Whitchurch Methodist Church in Cardiff in February.

More than 120 singers joined Ben Pinnow as the musical director and Ben Teague as the organist with the St Woolos Synfonia, in rehearsing and presenting the Coronation Anthem, Zadoc the Priest by G. H. Handel and the Gloria in D by A Vivaldi.

The guest soloists for the day were Sarah Jane Griffiths, soprano and Matthew Farrell, counter tenor. After almost four hours of rehearsal and a very enjoyable afternoon tea, the performance was attended by a large appreciative audience. The church was again filled to capacity for a musical event that it hopes will be repeated in the future.

The popularity of the Come and Sing events is growing rapidly and each one welcomes all singers of any ability to come along for a very enjoyable day and the opportunity to sing with a large choir.