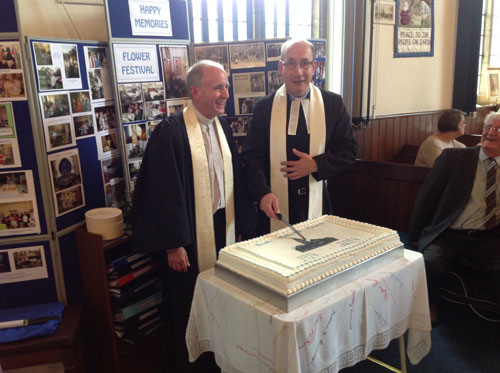 Neath Methodist Church in the Neath Port Talbot Circuit is celebrating its centenary during 2014. The first Methodist cause in Neath had been a Bible Christian chapel. When a larger building was required and planned in 1911, the Bible Christians had become part of the larger United Methodist Church. So on 3rd September 1914 Windsor Square United Methodist Church, Neath, was opened. The trustees financed the building of the church by asking for donations of a penny a brick. Consequently the church has always been known locally as “Penny Brick”. The church became Neath Methodist Church in 1971, following amalgamation with the nearby Neath Wesley Methodist Church. Members of other congregations have also joined the Neath Methodist congregation following the closure of other churches at Aberdulais, Briton Ferry and Skewen Wesley. Our centenary celebrations have therefore embraced the stories of these other churches, as well as “Penny Brick”.

The first main event of the centenary year was a three day Flower Festival in June, with displays provided by community groups and neighbouring churches. Throughout the festival the main church meeting room was transformed into the “Windsor Tea Room”, with vintage teas being served each day. Several hundred people were attracted to the festival at various times. It was a very successful venture.

On 3rd September, the actual anniversary of the opening of the church, an exhibition was opened by HM Deputy Lord Lieutenant of West Glamorgan, Mrs Ann Harries. This was part of “Open Doors 2014”, an initiative of CADW. Many photographs and memorabilia were on display that proved to be of great interest to local people. The displays not only reflected the history of “Penny Brick”, but the other churches that have since become part of it. Throughout the twelve days of the exhibition the church was open each day and once again the Windsor Tea Room proved very successful. The opening of the exhibition also included the launch of a commemorative book by John Southard, “Pennies for Heaven”.

On the evening of 3rd September a very successful Centenary Dinner and entertainment was held at The Castle Hotel in Neath attended by 80 members and friends.

The Centenary Thanksgiving Service was held on Saturday 6th September. A number of civic and ecumenical guests attended and the preacher was Rev Dr Stephen Wigley, Chair of the Wales Synod. At the conclusion of the service a centenary plaque was unveiled and a large centenary cake was cut.

Later in the autumn we have a special schools event, “Experience Harvest”, for which over 300 children have been booked to visit the church and engage with various “stations” focusing on the goodness of God and the fruit of the Spirit. We also have a number of former ministers returning to lead worship and a Songs of Praise concert featuring the Neath Male Choir.

We are truly celebrating God’s faithfulness to us over 100 years as the members of “Penny Brick” continue to serve God and their community.