This year Rev Brian Sherrington is celebrating the 50th anniversary of his Ordination this year. Together with his wife Audrey, they shared a cake with those present at the Wesley Day Service on Thursday 23rd May at Rhos-on Sea. 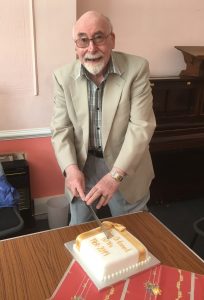 The Birmingham Conference in 1969 was held at Aston University and Brian’s ordination service was at West Bromwich. His first appointment as an ordained minister was to the Liverpool Crosby Circuit where we spent 3 happy years living in Formby before Brian started his 16-year stint as an Army Chaplain.

Also present and sharing in the celebrations for the 50th anniversary of his ordination was Rev John Wiggall, and another colleague in the Conwy & Prestatyn circuit, Rev. David Woodward, was also ordained at the same Birmingham Conference.