The Atif family left their home in Pakistan in 2011 and came as asylum seekers to the UK.  Elisha was 9 and Maresha was 5 and life had become increasingly hard for this Christian family.  They were placed in Swansea, and very soon after they arrived, found their way to Sketty Methodist Church (on the advice of Rev Irfan John, the Wales Synod Enabler for Culturally Diverse Congregations).  Here the congregation welcomed them with open arms, arranging lifts to and from church and helping them to settle in the UK.  In return Atif and Saima and the children found their way into the hearts of the members of the congregation through their generosity and deep faith.  When Angel was born, the whole congregation celebrated.

The church was so sad when the family made the decision to leave Swansea and move to London to be nearer Atif’s brother and family.  But members kept in touch, and it felt like an answer to prayer when the family decided to return to Swansea.  It was their church family whom they had missed the most.

Fast forward to 2019.  Elisha and Maresha were confirmed in June and made members of what is now Uniting Church Sketty.  And finally, after much hard work on their part, the whole family became British citizens at a special ceremony at Swansea’s Civic Centre on 22 July 2019.

When arranging the ceremony with the Registrar, Atif asked how many guests they could bring.  “Only two,” was the reply, “unless you pay for a private ceremony, in which case you can bring up to 70”.  There was no question for the Atifs!  Of course they wanted their church family to celebrate with them.

And this is what led to around 60 people from Uniting Church Sketty descending on Swansea Civic Centre to support Atif, Saima, Elisha, Maresha and Angel as they became British Citizens.  When the Registrar opened the door to the waiting room, she did a double-take and couldn’t believe all the people present.  After a wonderful ceremony, in which Atif and Saima made their promises using the Church Bible and all the family, including 6 year old Angel, signed a special book, both the British and the Welsh national anthems were sung.  As you can imagine, the singing completely drowned out the recording of these songs.  Afterwards, the Registrar told Rev Leslie Noon, that never before had they seen so many people come to support one family.  She was simply amazed!  And when she asked Atif which church the family attended, he proudly told her “Uniting Church Sketty.  And they are my family”.  There wasn’t a dry eye in the house! 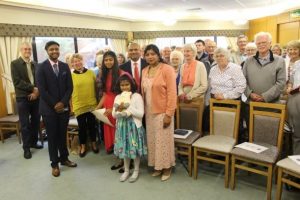 PHOTOS:  Atif, Saima, Elisha, Maresha and Angel Gill (and with some of the congregation from Uniting Church Sketty at the Citizenship Ceremony)