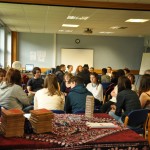 On Saturday 13th September, 27 young people aged between 11-18 connected with Methodist Churches right across Wales met at Theatre Hafren, Newtown, for their annual ‘Youth Forum’.  We had a good loyal number of young adults helping, as well as a Worship band from the Methodist Churches in Aberystwyth. We started with some welcomes and good refreshments, well it was an early Saturday morning!
Our theme and journey for the day was ‘Change’:Change in 3 ways
1. Change the World in One million ways.  In this workshop led by Christian Aid Wales, young people were encouraged to think about how can we serve God, love people and protect the planet.   2. ‘Change Hearts’  This was led by Emily Barry assisted by Trish Earlam, where she led a ‘Bible log in’ to encourage the young people to see the Bible as something that still has the power to change hearts.
3. ‘Change Attitudes’  Megan Thomas (UK Youth President for 2014-15) and Abby Watterson led this session in which they encouraged the young people to think about mental health and related issues facing young people. Deacon Samantha Taylor (in keeping with some of the adult Synod topics) did a short presentation on ‘Presumed Consent’ and information booklets were given to young people and adult leaders there, so they could continue their own discussions in their church youth groups.

After lunch Pete Taylor and Richard Sharples talked about future youth participation in Synod Policy Committee.  Two young people put themselves forward to be nominated as reps to a Synod Policy committee meeting to be held early next year.  These were:  Mary Sharples & James Noys.  Both are from North Wales.  Richard and Pete proposed their names be accepted and all present were in agreement.

We had some times of Worship throughout the day as well as some ice breakers and ‘voting’ games led by Cathie Steele and Bex Shaw.  A promotional video on 3Generate was shown to encourage more young people to come next year.  Towards the end of the day, we came into join the adult Synod for the closing devotions.  3 young people took part in the devotions.

On behalf of YWAG, I wish to thank all who helped on the day, and we have to give Thanks to God for all the young people entrusted to our care in our Churches and Circuits across Wales.